Avengers, assemble!  This weekend, The Avengers opened to huge crowds across America.  People flocked to see these heroes battle Loki and his army, intent on destroying the American way of life. 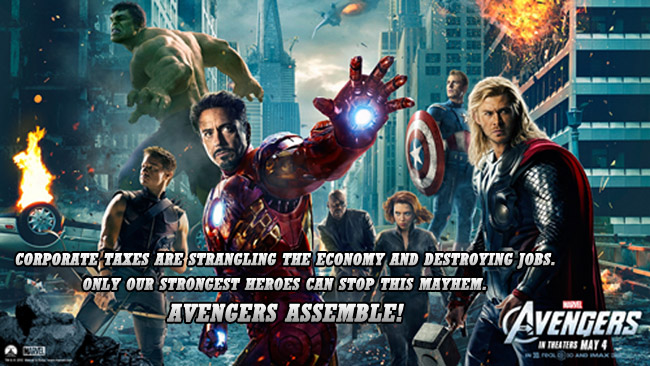 Oddly, a similar fight is taking place over American businesses, as foreign countries use every weapon in their arsenal to attract U.S. companies’ investment and the jobs that go with it.  But too few heroes here at home have stepped up to battle to make the U.S. more competitive.  Instead, the businesses themselves are being targeted by media outlets spinning their own good-versus-evil tale.  These reports have claimed that some of our most iconic technology brands -- engines for economic growth and innovation across the country -- have joined the side of evil.  To make the case, the reports, including the most recent about Apple by the New York Times a few days ago, rely on incomplete and erroneous data to weave a tale of misinformation that only a Hollywood writer could match.

In spite of its best efforts to create a riveting story, the Times acknowledges that Apple and the other technology companies referenced in the article have done nothing illegal or even improper.  These companies pay billions of dollars in taxes -- every penny they owe.  To be sure, tech sector companies, like all law-abiding businesses, are focused on maximizing the return on investment made by their employees and shareholders, and so they take steps -- within the bounds of the law -- to pay what they owe to governments but not more than they owe.  If that were a cause for castigation, we would all be in trouble.  I have yet to meet the person who tells their financial advisor or tax software, “I want to pay the IRS more than I have to.”

The real villain is not the tech sector, but an arcane tax code that has clearly outlived its useful life.  Our tax code predates the digital era.  It hurts America’s competitiveness and, too often, leads to jobs going overseas instead of staying here at home.  The Organization of Economic Development (OECD), after studying the effects of various types of taxes on the economic growth of developed nations, concluded that corporate taxes are the most harmful for growth.

So we know the villain, but our policymakers have refused to take it on.  The U.S. government has stood on the sidelines as other countries reduced tax rates and simplified tax structures, making their markets more attractive to business investment.  As one tech executive remarked several years ago, the tech industry is not in Ireland for the weather.  Today, the U.S. boasts a Hulk-like corporate tax rate -- the biggest in the world, and 50 percent higher than the OECD average.

Conveniently ignored by the Times’ article is the fact that the tech sector has long championed breaking the anti-competitive death grip that the tax code has on U.S. companies.  These companies are not enamored with the costly and complex tax planning needed to ensure that the U.S. tax system does not place them at a competitive disadvantage. Instead, they would prefer a code that is in their and the nation’s economic interest and encourages investment in our country.  We can get there by simplifying the tax code, transitioning to a territorial system, and creating incentives to innovate here in the U.S.

In the 26 years since the corporate tax code was last rewritten, few policymakers have stood up to fight against this wrongheaded system and to fight for American jobs.  By focusing on developing and implementing policies that are consistent with today’s hyper-connected globally integrated world, we could ensure that the U.S. economy becomes an even bigger blockbuster than The Avengers.