As the crew for Apollo 11, Armstrong, "Buzz" Aldrin, and Michael Collins grabbed the attention of the world on a mission at the cross-section of innovation and adventure.  Landing on the moon on that July day in 1969, they capped one of the most daring -- if not the most daring -- scientific expeditions of the last century. 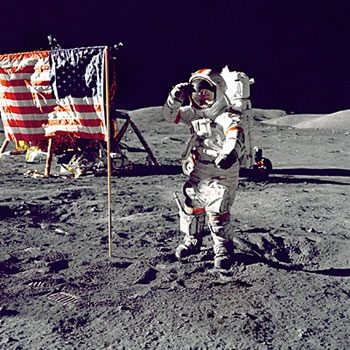 From blastoff, to the landing of the lunar module, to the first steps on the moon, to the journey home again, Armstrong and the Apollo 11 crew transformed how we viewed the world.  Their fantastic voyage featured game-changing technology matched only by the bravery of the men in their rocket.

As the LM touched the moon's surface, Mission Control (and a global television audience of about half-a-billion people) waited breathlessly for word.  Finally, Armstrong's voice crackled through the air.  "Houston, Tranquility Base here.  The Eagle has landed."

On that Eagle's wings, Mr. Armstrong carried the imaginations of the human race.  With his success, he dared us to dream more, to push the boundaries of what we know, and to seek new fields for exploration and adventure.  He has inspired the generations that followed him, and we are all in his debt.