In an election year when the economy and job creation are center stage, it is inevitable that tax reform becomes an important issue of debate for all the candidates.  Most recently, President Obama released a tax reform framework.  Republican candidates Mitt Romney and Rick Santorum have put forward their own economic plans that include tax reforms.  Key members of Congress also have sought to push tax reform to the top of the political agenda for this year.


In the table below, we look at the key issues that each tax reform plan contains.  Beneath the table are the Information Technology Industry Council's principles on tax reform and a glossary of tax terminology. 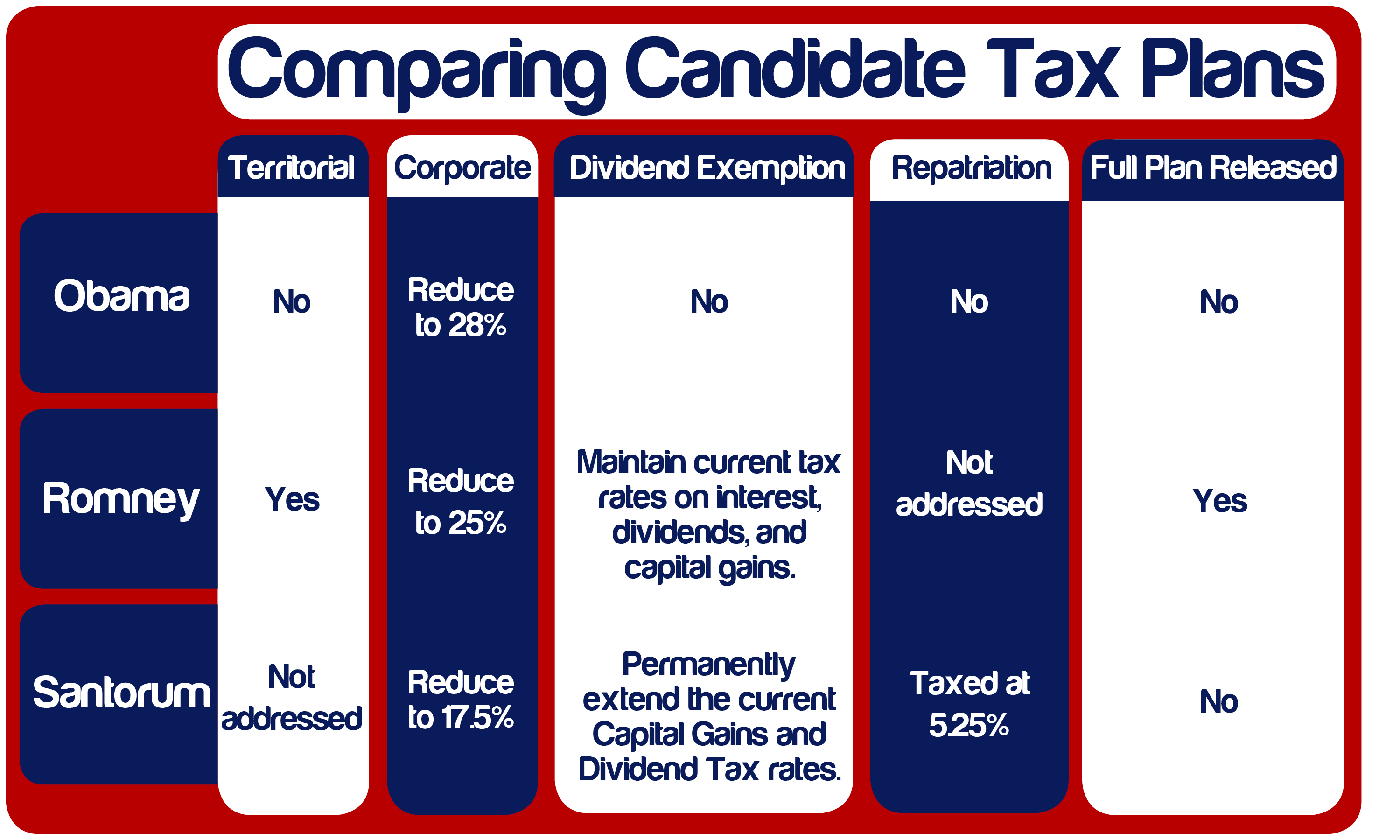 Corporate Tax:  A tax levied on corporations' profits. Because corporations are legal entities separate from their owners, they may be taxed as if they were persons.  A corporate tax, then, is the equivalent of the income tax for natural persons.  Corporate taxes vary from country to country; in the United States, they are levied at both the federal and state levels.
Territorial Tax System:  Any tax system that only taxes income earned in that country.  For example, if one lives in Belgium, one only owes taxes on income earned in Belgium.  If one conducts a great deal of business in Great Britain, income from that business is not taxed in Belgium (though it may be taxed by the UK).
Dividend Exemption:  The percentage of received dividends that a corporation may exclude from its taxable income.  That is, a company may deduct a certain amount of dividends received from its investments.  When a corporation owns less than one-fifth of another company's shares outstanding, it may deduct 70 percent of dividends.  When it owns less than 80 percent of the company, it may deduct 75 percent.  When it owns more than 80 percent of the other company, it may deduct all dividends.  Dividend exclusion helps avoid double taxation, but is not available to any individual investor.
Repatriation:  The act of an individual or company bringing foreign capital into a home country and converting it to the domestic currency.  Generally speaking, an individual who repatriates capital is usually converting foreign earnings into his/her home country's currency, perhaps in the process of moving back to the home country after having a job abroad.  A company that repatriates capital is usually bringing over the returns on foreign investment.
Passive Income:  Earnings an individual derives from a rental property, limited partnership, or other enterprise in which he or she is not actively involved.  As with non-passive income, passive income is usually taxable; however it is often treated differently by the Internal Revenue Service.