In early August, when Governor Mitt Romney selected Congressman Paul Ryan to be the second of the Republican two-man team for the White House in 2012, I expressed TechElect’s hope that an extensive discussion on the future direction of the U.S. economy would occur and be one centered on thoughtful ideas that advance the debate.

After the last few days here in Tampa, it is fair to say that positive themes and thoughtful ideas are being articulated by leading business, policy, and thought leaders.  Here is a sample:

The Tech Footprint is National, from Heel to Toe.  Google hosted a breakfast discussion centered on a new report released by the Bay Area Council Economic Institute and Engine Advocacy that outlined the technology footprint in the U.S. economy.  The study estimates that there are 9.2 million high-tech jobs – roughly 5.6 percent of U.S. jobs – and these jobs are not just in the traditional regional tech hubs in Silicon Valley, Texas, Massachusetts/New Hampshire, and North Carolina.  In fact, a terrific data visualization map from Engine Advocacy shows a tech footprint that is national, and not regional, in scope, and continuing to grow.

Thinking Out of the Box on STEM Education.  Microsoft hosted a terrific multi-panel discussion about the role of the Next Generation in politics and policy, with a strong focus on improving teacher quality and student participation in science, technology, engineering and math (STEM) education.  Microsoft General Counsel Brad Smith set the tone in his opening remarks by highlighting the current skills 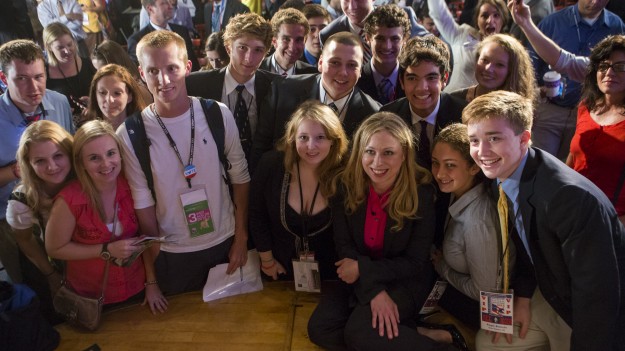 mismatch in our country, with many high-skilled jobs in the U.S. going unfilled.  Exhibit A is Microsoft itself, where there are more than 6,000 job openings in the U.S.  That elicited a bit of a buzz among the mostly young people in the audience – perhaps it was surprise that there were so many positions available at Microsoft, or perhaps they were asking each other if it was not too late to pursue that STEM degree, or both.

In a discussion with NBC’s Chuck Todd, Josh Romney, son of Governor Romney, agreed with Mr. Smith that our schools are not producing enough STEM students and on the need for more math and science students, but he also stressed the importance of teacher quality and teacher pay.  Illinois Congressman Aaron Schock and former D.C. Schools Superintendent Michelle Rhee cautioned that education challenges could not be solved by increasing spending, each stressing that financial investment is no substitute for better management of education.  Ms. Rhee also pointed out to her panel’s moderator, NBC’s Chelsea Clinton, that teaching requirements in many districts and states are so strict that Ms. Clinton’s father, the former president, could not teach a course on politics and government.

Advancing Innovation Means Advancing Skilled Immigration Reform.  A luncheon panel discussion on the Innovation Economy hosted by Google, which featured Michigan Governor Rick Snyder, New York Times columnist Tom Friedman, and U.S. House Majority Whip Kevin McCarthy from California, touched on the need to better develop home-grown talent over the long-term.  However, all agreed that even that was not enough to address current and future demand, and all agreed that retaining international students with green cards after graduation had to be a top policy priority. 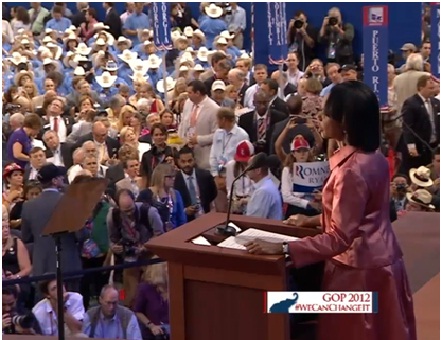 In her speech to the convention delegates, former Secretary of State Condoleezza Rice said that the U.S. “must continue to welcome the world’s most ambitious people to be a part of us.  In that way, we stay young and optimistic and determined.” Dr. Rice eloquently reminded us that,

“…greatness is built on mobilizing human potential and ambition . . . People have come here from all over because they have believed our creed of opportunity and limitless horizons . . . And they have come here from advanced societies as engineers and scientists that fuel the knowledge-based revolution in the Silicon Valley of California, in the Research Triangle of North Carolina, along Route 128 in Massachusetts, in Austin, Texas, and across this great land.”

Her appreciation of the contributions of foreign talent to our higher education system and our overall economy is no surprise.  She was both a witness and a party to the information technology boom during the 1990s as provost of Stanford University.

Breaking Down Barriers.  As my colleague, Geoff Lane, noted in a previous blog, U.S. Senator Rob Portman of Ohio focused his convention speech on the need for “policies that encourage innovation, risk taking, investment, and jobs.”  Specifically, Senator Portman called for breaking down barriers, starting with the numerous obstacles abroad that hamper U.S. business success in the global economy – an economy where “95 percent of the world’s consumers live outside our borders.  And to create jobs, our workers and our farmers need to sell more of what we make to those people.”

A major voice on the need for tax reform, Senator Portman also correctly pointed out that the current U.S. tax system represents a home-grown barrier to success and economic growth because it is “outdated and complicated.”

Celebrating the Entrepreneur.  TechElect has long recognized that innovative entrepreneurs are at the heart of our industry’s past, present, and future successes; they drive cutting-edge products, services, and companies.  So we were heartened by the recognition and celebration of the entrepreneurial spirit:

Strip away the pomp and circumstance of a political convention, and what you have left are the discussions and dialogues – many of them triggered by the speeches given by policy leaders like Senator Portman, Dr. Rice, and Congressman Ryan, or by the thoughtful ideas offered by Brad Smith, Michelle Rhee, Tom Friedman, and so many others.  TechElect is encouraging and facilitating many of these discussions and dialogues, and will continue to do so here in Tampa, next week in Charlotte, and throughout the remainder of the political campaign.

Yes, who wins the election this November – for the White House, the Senate, and the House of Representatives – is very important.  Perhaps more important, though, is whether the American economy will win in 2013.  By driving discussions and dialogues on innovation, competitiveness, entrepreneurialism, and job creation leading up to the election, we at TechElect are working to increase the odds of policy success and the resulting economic success after the election.