Applied Materials "Is Just Magic"
May 09, 2013 by Tom Gavin (Formerly of ITI) View all posts by Tom Gavin

When the leader of the free world walks through a door, it is usually the audience that is in a bit of awe.  But today, when President Obama visited the Applied Materials campus in Austin, Tex., the tables were turned.  After touring the facility and seeing the chip assembly facility and the precision with which the team there works, the president seemed genuinely impressed.

President Obama’s remarks focused on innovation, advanced manufacturing, and job creation.  From STEM programs to incentives for R&D and for businesses to build new facilities here at home, the president spoke of the total formula to help ensure America’s long-term global leadership in technology and innovation.  And he again pointed to Applied Materials as an example for how that formula leads to success. 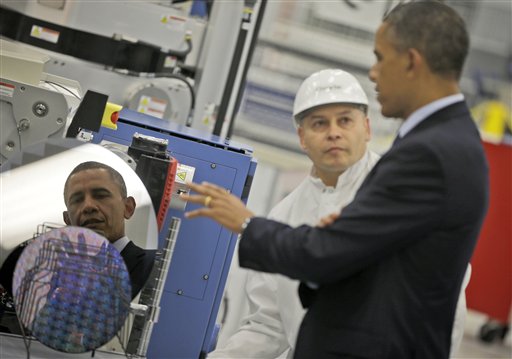 As for the policy background of the president’s trip, White House advisers this afternoon provided details on the start of competitions for three new Manufacturing Innovation Institutes -- partnerships among business, universities and community colleges, and government to develop and build manufacturing technologies and capabilities that will help U.S.-based manufacturers and workers to create good jobs.  President Obama also renewed his call for Congress to take action on his proposal to create a one-time $1 billion investment to create a network of 15 manufacturing innovation institutes across the country.

During a call this afternoon, National Economic Council Director Gene Sperling noted that initiatives like this will help to define wither the U.S. economy grows quickly.  Advanced manufacturing, he noted, “punches above its weight” and creates new jobs and new opportunities for families and businesses alike.

(Listen to excerpts from the call.)

Sperling also made the case for the president’s proposed National Network for Manufacturing Innovation (NNMI).  The President’s FY14 Budget includes a $1 billion investment at the Department of Commerce to create the NNMI, a model based on approaches that that other countries have successfully deployed.  Each institute would serve as a regional hub designed to bridge the gap between basic research and product development, bringing together companies, universities and community colleges, and Federal agencies to co-invest in technology areas that encourage investment and production in the U.S.   As Information Technology & Innovation Foundation President Rob Atkinson noted last month when the budget was released, the NNMI has significant potential.

Also of note today, President Obama issued an executive order requiring that newly released government data be made freely available in open, machine-readable formats, while appropriately safeguarding privacy, confidentiality, and security.  The move will make huge caches of previously inaccessible or unmanageable data easily available to entrepreneurs, researchers, and others who can use those files to generate new products and services, build businesses, and create jobs.

The saying goes that everything is bigger in Texas.  Let’s hope that investments in innovation and R&D get bigger, too.