Ambassador Ron Kirk Talks with ITI about the Information Technology Agreement
May 15, 2012 by Tom Gavin (Formerly of ITI) View all posts by Tom Gavin

Today is the 15th anniversary of the Information Technology Agreement (ITA).  As trade experts gathered in Geneva to mark that milestone and look ahead to the future of the pact, ITI had the opportunity to ask U.S. Trade Representative Ron Kirk for his views of the ITA and what may lie ahead. 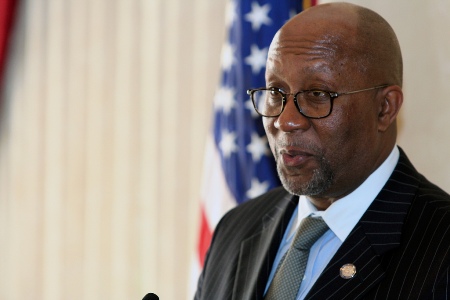 Mr. Ambassador, first thank you for taking time to share your views on the Information Technology Agreement (ITA).  As we mark the ITA’s 15th anniversary, what do you see as the strengths of the agreement?

The ITA is a great example of a win-win trade agreement that can benefit everyone by promoting trade, jobs, and economic growth while lowering prices for American and global consumers. The sector has proven itself to be an amazing growth driver and provider of high-paying jobs for the American economy.

In the 15 years since the ITA entered into force, global trade in information and communications technology products has more than tripled -- from $1.2 billion to $4 billion annually.  This spectacular growth has been in no small part driven by the increase in the number of ITA Participants -- growing from 29 countries and territories to 73 Participants today.

There has been a lot of focus, both in the U.S. and with our trading partners, that it is time to expand the ITA.  What’s your view?   Would expansion help the U.S. and global economies?

There is a growing consensus that we can do something positive for the global economy this year by expanding the ITA to cover new products. In fact, last November in Honolulu, President Obama and other APEC Leaders agreed to play a leadership role in launching negotiations to expand the ITA. We feel strongly that a successful ITA expansion initiative would benefit the U.S. economy and increase exports. We also think an ITA success would demonstrate that the WTO can still deliver commercially meaningful outcomes.

We are not going to set any artificial deadlines, but our aim is work actively with the other members of the ITA to get negotiations started and to wrap them in a timely fashion. While we want to get negotiations underway as soon as possible, we need to be sure that whatever we start, we can finish. I cannot overstress the importance of framing this initiative carefully so that all Members participate and it can succeed. The WTO cannot afford another failed negotiation.

We’ve seen global trade talks get slowed down – Doha being a good example.  What's different about the ITA that might give it a better chance of success?

One advantage is that we are not proposing a new agreement here.  Instead, we a looking to take a highly successful agreement that already exists and simply make it a more powerful tool for growth and innovation by expanding it.  So, this is a simpler undertaking that stands to yield quite significant results.

The tech sector is staunchly behind ITA expansion.  We see it as the WTO's most commercially successful agreement.  What can we do to help strengthen your efforts on this front?

We are grateful for support from industry here in the U.S. thus far and ask that you continue to be a strong advocate for this important undertaking and work closely with your counterparts overseas to help us take this forward.

Finally, as we’re about half-way through 2012 and this election cycle, what do you see ahead?  What achievements do you think are realistic on the trade front generally, and what will likely need to wait until 2013?

This year, the Obama Administration is moving full speed ahead with a busy trade agenda that is helping to achieve President Obama’s goal of restoring America’s economic by putting more people back to work and creating and economy that makes things the rest of the world buys.  The Administration is also doubling down on strong trade enforcement with a whole-of-government approach to combating unfair trade practices.

President Obama is confident that American producers can compete anywhere the playing field is level, so the Administration is leading efforts to strengthen the rules-based global trading system and achieve greater international trade liberalization.  The President’s trade priorities illustrates a wide range of initiatives the Administration is advancing in pursuit of better jobs for more Americans and increased trade that builds greater prosperity for all.